I started diving into research about Formaldehyde and how to measure it after my parents started having indoor air quality issues in a house they recently bought and remodeled.  I wanted to get some quantifiable metrics on what I could so I purchased a formaldehyde meter and sent off some air samples to a lab for testing.  I know this is only a small piece of a much larger picture in terms of indoor air quality (IAQ) but it seems to be an important part of the VOC side of IAQ.

The meter I ended up purchasing is the Extech Instruments FM200 Formaldehyde (CH2O or HCHO) Meter, I have had good experiences with Extech equipment in the past but as you will find in this review I was severely disappointed this time. 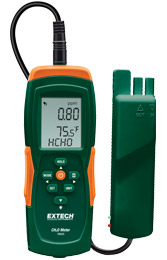 Okay let’s dive in.. this meter is re-branded and made by Taiwanese company called Meter Industrial Company (MIC), this meter is part of a kit where different sensors can be plugged into the meter-head to measure CO2, CO, O2, combustible gas, or formaldehyde. 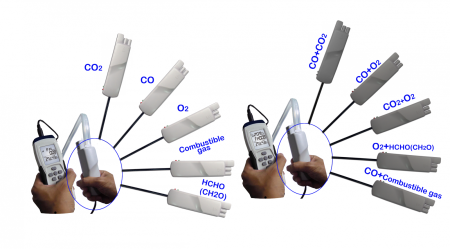 Here is a list of other meters that seem to also be manufactured by MIC and their MIC equivalent.

My first impression of the meter when I opened it up and powered it on was that the main meter body seemed decent build quality but the probe seemed cheap.  The measuring probe has cheap LEDs protruding out the side, there is no labels for the LEDs, the serial number is put on with a low quality sticker, and the fan in the probe makes grinding noises when you move the probe while it is operating or if it is placed at an angle.

When you first power on the meter it will run the fan continuously for 1-15 minutes while the LCD flashes zeros in sequence 0000… before it will give you a measurement.  Then it will start showing you a formaldehyde (CH2O) reading in PPM with a resolution of 0.01 ppm.  The startup time is probably to bleed off residual electrical potential built up on the sensor.  The first thing I noticed about the reading is it takes about 30 seconds to 2 minutes for the reading to stabilize when moved from one environment to another.  The formaldehyde sensor element within the sensor probe has a T90 response time (time it takes for the sensor to read 90% of the formaldehyde concentration) rated for <30 so this long recovery time could be due to the fan in the pump not moving enough air fast enough to clear residual formaldehyde left in the sensor probe’s internal volume of air.

When I started using this meter I almost immediately ran into issues with getting a consistent reading.  The inconsistency seems to be worse when the fan is turned on.  The fan runs for a few seconds then turns off for a few seconds.  Between each on off cycle of the fan the reading jumps around.  I do not know why the engineering decision was made to run the fan intermittently but is seems to negatively affect the stability of the reading, I would like to see a consistent fan mode.  In normal operation when the meter is placed on an elevated surface with the fan on I see a steady jumping around in the reading of about +/- 0.25ppm up to +/- 0.5ppm around a midpoint and sometimes more.  The sensor element manufacturer rates the accuracy once calibrated to about +/-0.02ppm (discussed more later in this article).  So the jumping I am seeing seems excessive.  This meter desperately needs a time weighted averaging (TWA) and a 15-minute short term exposure limit (STEL) averaging mode.  Some of the products from the other companies which are also made by the taiwanese MIA company, offer this feature.  If you look closely at the LCD there is actually a segment that says “TWA” and “STEL” they just chose not to implement it in software.  The interface problems don’t end there, the Min & Max reading cannot be cleared without powering off the meter and powering it back on again.  Also it is far too easy to accidentally go into calibration mode with too long of a press of the mode button, there should be a confirmation before going into this mode.

These are just two short videos of drift, if I were to record a video over the course of 10 minutes or so you would see even larger swings.  The drift is normally bigger with the fan on than with the fan off but the clips above show a case where the drift with the fan off was larger.   My curiosity to what was going on with the inconsistent readings got the best of me and I opened up the sensor probe to see what I could learn. 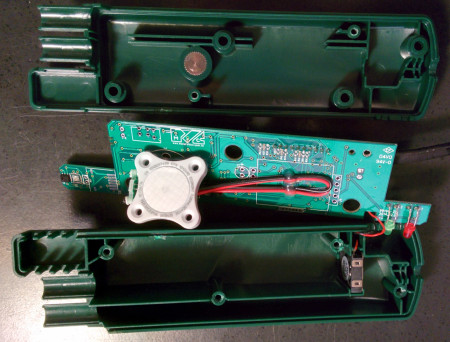 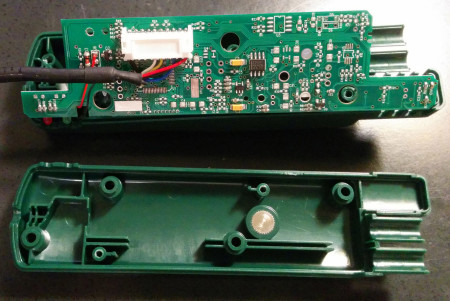 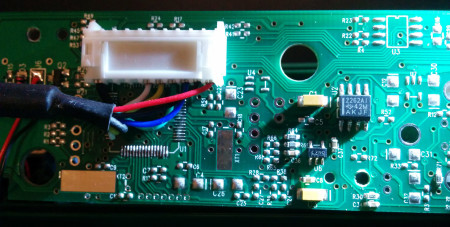 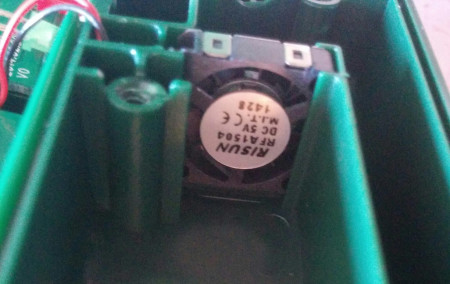 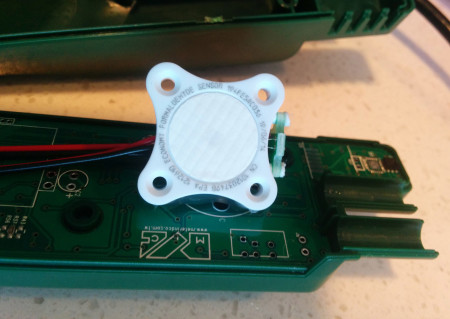 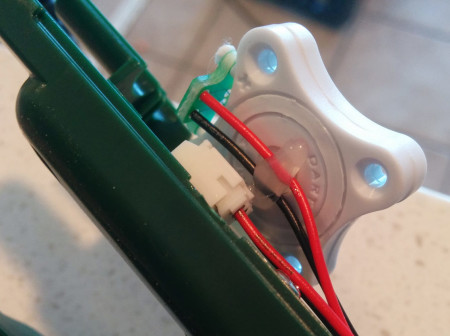 You can see the decal on the circuit board for Meter Industrial Company (MIC).  The formaldehyde sensor in the sensor probe is made by Dart Sensors Ltd which produces a high volume of alcohol sensors for breathalyzers.  The sensor has two versions an economy version and a premium version.  Here is Dart’s description of the differences between the economy and premium sensors

This sensor is available in two versions to suit the requirements of different markets. The premium version represents the optimum specification for use where the best performance is required, for example in scientific instrumentation or safety critical applications. The economy is a pared-down variant, offering adequate performance where low cost is of greater importance than absolute precision. – Source

The premium sensor is best used when you are expecting to detect and measure formaldehyde. The economy is more suited for applications where you are not expecting it and would just need an indication of when formaldehyde is present. – Source

This meter uses the economy version and I think the second description from Dart’s website sums up my experience, the meter can tell me when there is formaldehyde in the air but does a poor job of telling me what the concentration is of formaldehyde in the air.  The cost listed on darts website for the premium and economy sensors are £13.05 and £11.05 respectively as the company is based in the UK.  These are retail prices and will be lower with volume.  With such a small price difference it is really disappointing to me that they chose to save a small fraction of the cost of the meter on the most important component in the meter and I can not take this meter seriously as a scientific instrument.

I would not recommend purchasing this meter, it basically just gives me a yes or no reading to whether there is a concentration above 0.03ppm of formaldehyde in the air, I can’t trust the reading on the LCD.  The choice to save a few dollars on the lower cost formaldehyde sensor could have been the fatal blow to this meter on top of the other issues it has, it is just not worth anywhere near the $350+ price tag for the inconsistency in measurements.  I learned from this and went formaldehyde test tubes to measure indoor formaldehyde levels.

Summary of problems with meter