I did not originally think of this idea but have done a great deal of research on the operation and components in the first generation 1990’s (93-99) Cadillac northstar ignition setup.  I have put together a lot of useful information for anyone looking to complete this project or modify the Northstar DIS setup for use on there car.  These pages outline some of the needed information to run a Cadillac northstar DIS (distributorless ignition system) ignition module and coils on a SBC with almost any GM OBD-I HEI ECM \ ECU.  I planed to use this on a 1227730 90-92 f-body or 1227727 90-91 C4 Y-body speed density ECM.

The Cadillac northstar first generation ignition system was used on the following vehicles:

The Northstar crankshaft has a trigger wheel (also called a reluctor ring) cast into the crankshaft between #3 and #4 main bearings.  Two crankshaft position sensors are installed into the side  of the engine block (facing front of car in FWD applications) between cylinders 4 and 6.  The trigger wheel has 32 notches, 16 large raised areas, and 16 small raised areas, as seen in Figure 1 and 2 below.

Note: Drawing not to scale, for accurate scaled version download the the CAD or PDF drawing below.

Note: The firing order above is that of a GM northstar block and must be changed for SBC applications, see below

The two crankshaft position sensors used in the Northstar setup are variable reluctance sensors separated 27 degrees apart.  Each sensor is mounted within a tight tolerance of the trigger wheel (reluctor wheel), 0.05″ (1.3mm) on the factory engine.

The Northstar ignition control module is what processes the input from three sensors and the proper signal output to the ECM \ ECU \ PCM.
It performs the following functions and more:
– It monitors the On-Off pulses produced by the two crankshaft and one camshaft position sensors.
– It creates a 4X and 24X reference signal (4X REF HI and 24X Crank) sent to the PCM for ignition control.
– It creates a camshaft reference signal (CAM HI) sent to the PCM for fuel injection control.
– It provides a ground reference (REF LO, CAM LO) to the PCM.
– It provides a means for the PCM to control spark advance (BYPASS and IGNITION CONTROL) called IGNITION CONTROL MODE.
– It provides a limited means of controlling spark advance without PCM input called MODULE MODE.
– The IC module is not repairable. When a module is replaced the remaining components must be transferred to the new module.

1) The crankshaft reluctor ring has 24 evenly spaced notches plus eight additional notches (shaded) used for synchronization for a total of 32 notches.

2) As the crankshaft rotates, the notches pass the position sensors and create a voltage pulse signal in the sensor that is an input for the ignition control module (ICM).

6) This process allows the ignition to synchronize and fire the first spark plug within 180 degrees (1/2 engine revolution).

8) Using 3 sensors allows the ICM to maintain ignition synchronization even if one of the 3 sensors fails.

To run the northstar ignition module on a SBC you will connect the wires to the coils as follows. 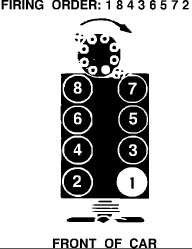 I have created a column in the tables below to outline which pins would be used if using the northstar ignition module on a 1227730, 1227727, or pretty much any HEI distributor OBD-I GM car.

Most measurements taken from the trigger wheel are giving in a range because measurements taken at different points of the wheel yielded different results, this is due to machining tolerances of the wheel.  The tolerances of the wheel do not need to be very close, the notch position and size is what is important so the module can figure out where the engine is in rotation.  Each of the 32 notches on the crank trigger wheel is about 15/64 (or 0.235 to be exact) of an inch in length and 3/16 – 13/64 of a inch deep. There are 16 small raised areas which are about the same length as the notches, they are about 7/32 (0.21 – 0.215) of a inch. There are 16 large raised areas which are about 3 times the length of the notches and measure in at 0.66 – 0.665 of a inch.  So calculating in a percent of error for machining tolerances, each notch and small raised area are the same length. The large raised area is three times the length of the notches.