The Nintendo DS Hardware:
In my bread-boarded prototype I am using a FTDI Vinculum USB host controller for the USB interface.  A Xilinx CoolRunner-II CPLD to convert the Nintendo DS SLOT-2/GBA  DMA interface to the FTDI PFIFO. 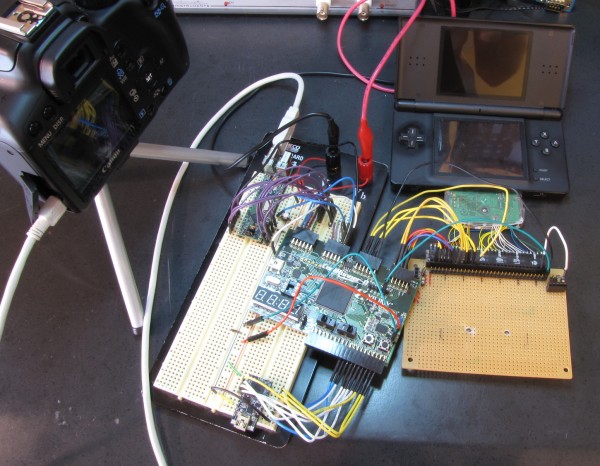 In the picture above there are only two main components used on the development boards; the Xilinx CPLD and the Vinculum USB host controller, everything else is for development and debugging.  The eval board on the bottom right of the bread board is a FTDI 2232H eval board.  I tested\debugged the CPLD interface with a FTDI 2232H instead of a FTDI vinculum which uses the same parallel FIFO interface.  Using the FTDI 2232H just lets the DS communicate with a computer instead of the USB host controller for easy debugging.

You can download the PDF version of this schematic here: NDS_to_FTDI_Vinculum_USB_Host_Controller.pdf
In the schematic above I use a Xilinx XC9572XL CPLD instead of the CoolRunner-II CPLD I used in my prototype.  I did this to lower the cost and for simplicity.  The CoolRunner-II requires a 1.8V core voltage which can easily be accomplished with a linear LDO 1.8v regulator but I did not see a need for the CoolRunner-II and the extra cost of the device.  I wired the camera shutter release so that the FTDI Vinculum or the CPLD could trigger the camera.  The FTDI_C_FOCUS and FTDI_C_SHUTTER will need to be ORed in the CPLD with the internal trigger lines.  Moving on to the camera USB connection you can see that I added the ability for the user to supply power for the USB 5V but it is important to note this should not be used and is not needed for cameras.  USB power is only needed by devices that are powered off the USB bus such as a flash drive.

The Atmle AVR Hardware:
I have been using a Atmel ARV to develop the code for the HDR controller.   I chose a ATmega644 uC (what I had laying around) on a Atmel STK600 development board. 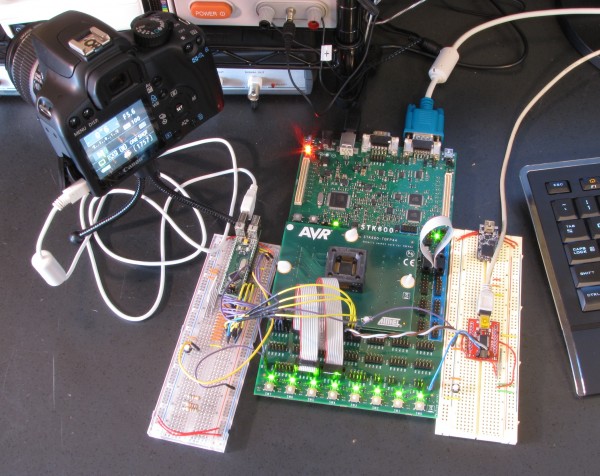 The Code:
As discussed above the code is written to be as platform independent as I could.  The code is by no means complete and as it stands is more of a proof of concept.  The basic framework needed for PTP/MTP transactions is implemented, PTP/MTP sessions can be started, events can be read, and the camera can be commanded to change settings and take pictures.
AVR/NDS to FTDI Vinculum USB host controller PTP/MTP implementation: USBCameraControl_v0.01.zip

The Next Step:
The FTDI Vinculum-II USB host controller recently was released, this new IC is a USB host controller with a programmable 16-bit uC on-board and free IDE.  It is the logical next step and the addition of a user programmable on-board uC expands the possibilities quite a bit, it would allow for a complete one chip stand along solution without the need for a Nintendo DS or AVR.