My niece wanted to be a princess for Halloween in 2016 so I decided to make her something unique, a color changing light-up LED dress.  I over-complicated the build as what normally happens normally the first time you make something.  I learned a lot from the process and many ways to improve upon the design, hopefully I can help someone else looking to make an LED dress.  All in I spent about $120, $45 of which were the dress and petticoat.

1. Selecting a dress to attach LEDs

I wanted the LED part of the dress to be modular so that the LEDs could be swapped out to light-up any dress.  As my niece is still young she could very easily destroy the dress running around and is growing fast so would quickly grow out of anything in a year or so.  To do this I decided to mount the LEDs on a petticoat \ underskirt which goes under the dress and “poofs” \ flares it out for lack of a better term.  While picking out dresses is definitely not my strong-suit I wanted something white so that it did not affect the color of the LEDs and not too thick that it would block out the LEDs light.  I ultimately ending up choosing this wedding dress. 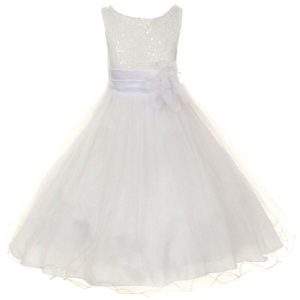 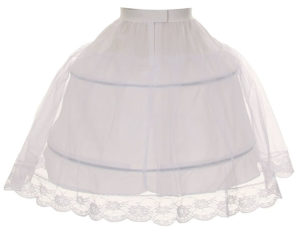 The LEDs I used are flexible red green blue (RGB) color LED strips, they are low cost and easy to source.  These can be found locally in big box stores along with online.  Many of the LED strips come with a simple controller and infrared (IR) remote so nothing else is needed to select the LED color, this is the cheap and simple solution.  There are other LED strip controllers on the market such as Bluetooth controllers which can be operated with your smartphone.  This could be taken even further with an Arduino or other microcontroller board if you want to do more advance color changing sequences or change colors based off events such as sound.

I purchased “waterproof” LED strips which have a protective clear plastic layer over the LEDs to help prevent against shorting and to add some more durability.  While these LEDs are marketed as waterproof they are not waterproof for long periods, water will easily get under this protective plastic layer if they were submerged.

The LEDs come in a 16.4ft (5 meter) spool that need to be cut to length. I cut fifteen roughly 11-3/4″ length strips, cutting the LED strip on the exposed solder pads cut lines.  Do not cut the LEDs anywhere else as you need these pads to connect power to each strip.  I wanted the dress to glow and not have the LED showing a point light sources so I put the LED strips on the inside of the petticoat facing towards the wearer’s legs.  To evenly light the dress I measured the circumference of the inside of the petticoat at the top and bottom, divided by 16 and marked 15 marks evenly spaced for the led strips.  For example if the circumference of the bottom of the petticoat is 64 inches, 64 / 16 = 4.  Then you would place marks every 4 inches.

I cut off the adhesive on the LED strips about 1/4 to 1/2 of a inch from where the solder pad / wire connections are on each strip and peeled off the clear plastic protective layer the same length back.  This is needed to make the electrical connections on each strip.

2.1.1 Attach the LED strips to the dress petticoat

First lay out all the cut LED strips making sure each strip is in the same direction, i.e. each power connector on the LED strop has the same polarity of 12V, G, R, B or vice verse.  This helps put all the strings in the same orientation on the petticoat and ultimately makes it easier to wire all the strips togeather.

The adhesive strips on the LED alone are not enough to keep the LED strips attached to the dress’s petticoat. I spent far too much time sewing the LED strips to the petticoat to make sure they would stay put as I knew my niece would be running around a lot in it.  This is my biggest lessened learned and what I would change if I built another one.  Do not waste time sewing the strips to the dress, use hot glue.  It’s quick and it works surprisingly well.

2.1.2 Wiring up the LEDs with soldered connections option

Here is another area where I spent too much time and over complicated the design.  I choose to split up the LED strip power into four sets of wires for two reasons; I though I may want to split up the controls on the LEDs to be able to have one side of the dress a different color than the other and to drop the current on each set of wires to insure full brightness of the LEDs.  Ultimately I never used multiple controllers and on the brightness concern daisy chaining the power to all the LED strips will not make a significant impact. In the end this was completely unnecessary and added unnecessary complexity.

You can see in the pictures above the four sets of wires I used to break the LED strips into four quadrants each with their own power wire.  Don’t do this, it way over complicates the dress.  I also added quick disconnects on each sets of wires which is not necessary

2.1.3 Wiring up the LEDs with solderless connections option

Don’t do the mess of wire I did above, use LED strip connectors, 3-way tees, and LED strip jumpers then hot glue them to secure them.  This will save you a bunch of time and be a huge help if you do not know how to solder or do not have much experience soldering.

To start the chain use a LED strip to power connection

Connect above to a LED strip 3-way connector 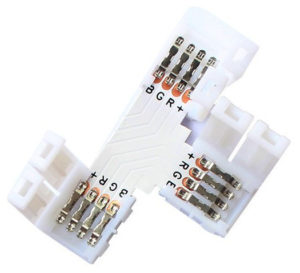 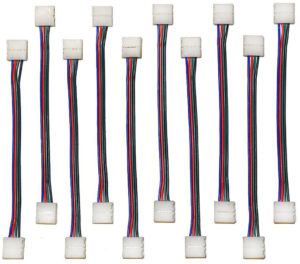 I did not want to purchase a battery pack that I would not use much so I decided to find a way to use my power tool 18V lithium-ion Ryobi battery pack, Home Depot’s in-store power tool brand. I already had a lot of Ryobi tools and they use high capacity lithium ion batteries . The LED strips run off 12V and the Ryobi power tool battery packs are 18V so a step down power supply was used to covert and regulate the voltage.

The step down converter I chose is dramatically oversized the due to heat concerns, I do not want the power supply to get hot in the backpack of a young kid running around.  There are a lot of variables that go into selecting an optimum power supply and you loose efficiency as you oversize but that is outside of the scope of this article.  I was choosing from a limited selection of low cost and probably not very efficient switching power supplies on Amazon that needed to be low dropout (go gown to at least 16V). If payed a lot more or bought a bunch and did testing I am sure I could find a better option.  If someone knows a good source of a high efficiency low cost 15-20VDC to 12VDC power supply feel free to leave a comment about it.

The power supply is fully module which is not necessary but a nice option if you want to use the Ryobi battery for other projects in the future.  Starting from the Roybi battery I found a 3D printed battery cap that will go onto the power post of the Ryobi battery pack.  You can purchase one from Shapeways. 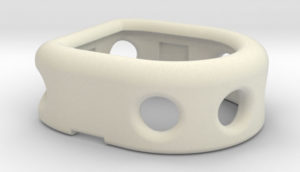 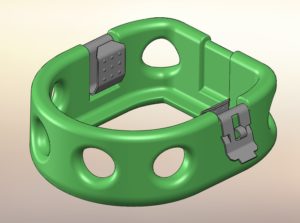 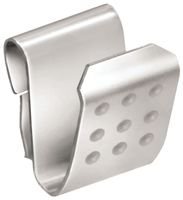 The metal contacts (last picture on right above) are Keystone 240 battery contacts which can be found on Amazon or Digikey.  You can get away without soldering on pretty much all connections with the supplies I link to in this article but I am not sure how to make a solid connection here without solder.  After soldered the connections need to be protected against shorting or contact with metal. I used a few coats of liquid electrical tape which stays flexible and is a good electrical insulator.

The voltage step down converter / regular is massive overkill as discussed previously.  I used a 15VDC-40VDC to 12VDC step-down voltage converter rated at 240 watts though I think that ratting is far over what it will safely operate at. 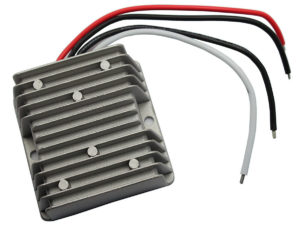 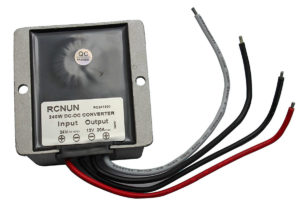 The voltage converter is connected with XT60 connectors which are commonly used on RC lithium polymer battery packs.  You can purchase XT60 connectors with pigtails or just bare XT60 connectors that require soldering.  These connections are optional, you can crimp or solder the wires directly. 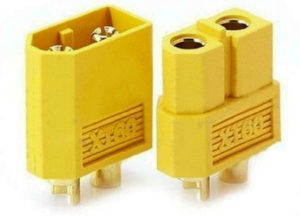 The RGB LED strip controller has a 5.5mm x 2.1mm power connector.  I purchased power plugs that require soldering but if you would like to use wire crimps you can purchase an extension cable which you can cut and splice. 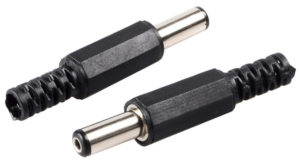 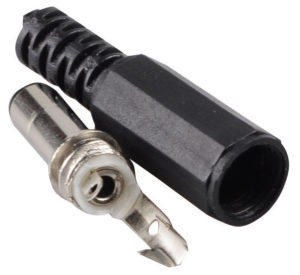 Here is my niece trying out the finished LED dress before Halloween.

– Don’t waist the time sewing the LEDs to the petticoat, use the adhesive strip that comes with the LEDs then use hot-glue to hold them in place once wired up
– Brighter is better as you can use less led strips
– It is not necessary to split the LED strips up into separate power wires, the voltage drop turned out not to be an issue.
– The power supply I used is way overkill but I wanted something that stayed cool.  I am sure there is a higher efficiency power supply solution out there that is reasonably cost

Disclosure: Some of the links to products and supplies on this page go through my Amazon Associates and/or Ebay partner account in hopes of helping to pay for web hosting and maybe even allow me to start a new project. If you are going to purchase any of the supplies listed here and if you found my site’s content useful, please consider purchasing through my links it will not cost you any more, thanks!